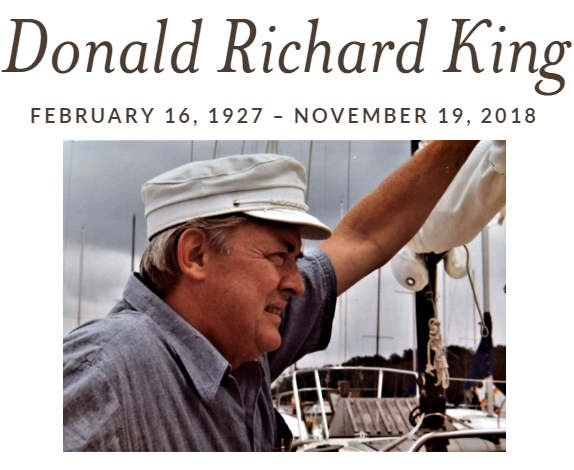 It is with great sadness that Dredge Central, LLC of Goodlettsville Tennessee learned of the November 19, 2018 passing of our founder and dredging legend, Don King.

Don graduated from Hillsboro High School in Nashville Tennessee USA, attended the University of Tennessee in Knoxville Tennessee, and served in the US Navy in WWII. In his earlier years Don delivered telegrams by bicycle for Western Union, was a bellboy at the historic Hermitage Hotel in Nashville, sold cars, started the first rolling restaurant in Nashville, and eventually entered the construction business which led to a more than 50 year career in the international dredge manufacturing industry.

Don King had a long, lively and storied career in the dredging industry beginning with American Machinery Corporation (AMMCO), continuing with Dixie Dredge, Dredge Masters International (DMI), Dredge and Marine Corporation (DMC), King Dredge and retiring in 2016 from the last dredging company he founded, Dredge Central, LLC. Don’s contacts and world travels read like a National Geographic article with his passport books documenting travel to countries no longer bearing the names stamped in the pages.

Don loved to detail some of his world travels to listening ears with one of his stories involving a trip to Zaire (now the Democratic Republic of the Congo) in the 1970’s during the leadup to the boxing fight between heavyweight George Foreman against challenger Muhammad Ali – “The Rumble in the Jungle”. Don had called ahead to a hotel to reserve a room and upon arrival, he was presented the best suite in the building which puzzled him until he learned that Ali’s manager,  bearing the same name, had been expected to visit in preparation for the upcoming fight. He didn’t explain the name challenge or pass on the room assignment, enjoyed the stay with amenities, and closed the dredge sale.

The dredging career Don loved so much involved projects from road building and dam levee construction as a contractor, domestic and international sales of new dredges with several dredge manufacturers, ownership of dredge building companies, development of a surplus market site known as the “Dredge & Pit Trader” from a paper mailer to what it is today – an international internet market site allowing equipment owners an avenue to buy and sell surplus dredge related equipment –  www.DredgeandPitTrader.com , and founding Dredge Central LLC, a company based on remanufacturing dredging equipment to provide buyers excellent used equipment priced well below the prices of new OEM dredges. Don was an innovator, an active entrepreneur, and at the age of 91, was still looking for great opportunities in dredging and other endeavors.

In lieu of flowers, the family has suggested memorial donations can be made in Don’s honor to St Jude Children’s Hospital. A Celebration of Life is tentatively planned by the family for mid-June 2019.

The staff at Dredge Central will miss Don and his enthusiasm for our dredging industry! 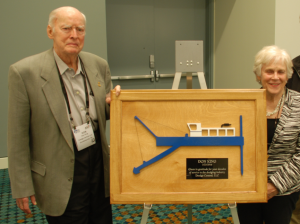 When you’re in a crunch for time and need a quality product, look no further than Dredge Central!! From signed quote to shipment; the order only took 13 business days to fabricate, test, and ship. This shipment of pipe weights and floating hoses were made to retrofit a booster aided dredging job in southern Florida. These pipe weights and floating hose will act as a discharge extension of the original purchase from a separate manufacturer. If the original package were purchased through Dredge Central, our experts would have been able to better analyze the situation and provide the correct equipment from the start. This would have saved both time and money that would be most valuable in these long term projects. This is something to keep in mind with who to make your first call when dredging equipment is needed!!

Below is a picture of the floating hoses being loaded onto our dedicated truck load to save additional time: 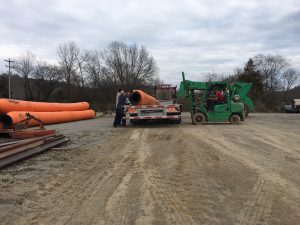 There has been a lot of buzz regarding the Dredge Central and Dredge and Pit Trader websites so far this year, which have led to the two most recent shipments.

Jeff Mayes has taken over for Bobby Prince as the new purchasing manager and has helped his first customer with a shipment of pipe floats. This east coast customer required a floating device to aid his pipe in staying on top of the water. The floats DC had were not available anywhere else on the market and Jeff was able to meet the needs of our new customer. Here at Dredge Central we put the customers needs first and will go that extra mile to make sure our end users are completely satisfied. A picture of the pipe floats being banded can be seen below: 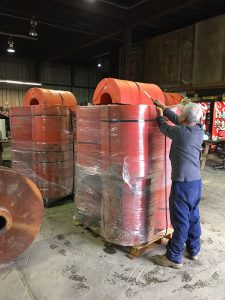 Dredge Central is also currently working on a Vosta cutterhead repair (mfg in the Netherlands) for a customer located in the northern United States. DC can either repair your current cutterheads or build you a complete cutterhead from scratch. Whatever your needs are foreign or domestic, DC is sure to answer the bill. A recent photo of the cutterhead repair after completion can be seen below: 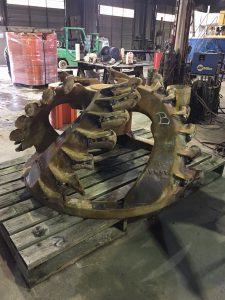 Whether you are “just looking” or would like general information, DC’s knowledge is unparalleled in the industry. We will help you find the right fit for your current project and will work alongside you to ensure your complete confidence in making DC your first and last call you will ever need!!

DC has an overhaul of pump inventory and we need YOU to come and look at our products we are offering! 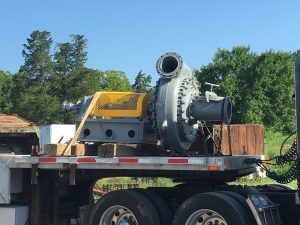 Listed above is a recent pump that was completely refurbished for a customer at far less than market value! These completely reconditioned pumps come with DC’s standard warranty and work like they are brand new! This pump listed above was shipped to a customer last month and is out performing the new pump that it replaced! 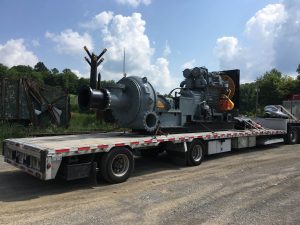 Pictured above is a newly reconditioned booster pump. DC reconfigured this pump in less than 2 months, which is less than half the time it would take a manufacturer to build one. This specific booster pump was shipped last month and is currently helping propel silt through a long pipeline in Iowa!

Contact DC today to see how we can help you become more efficient with your dredging! We offer free consultation!

Bourg Marine located in Kenner, LA requested a used dredge with low hours that could meet their production and lake dredging needs. They looked no further than DC’s completely renovated VMI Dredge!! 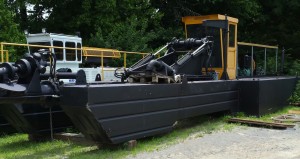 This modified VMI Model MD815B, with 8″ Morris pump and GM 6-71 diesel engine was refitted with a standard rotating cutterhead ladder, hydraulic swing winches, spuds, rams, and saddle tanks. One look at this dredge and Bourg knew they had found what they had been looking for. They also bought 1,000 feet of 10″ SDR27 pipe that DC also had in stock. 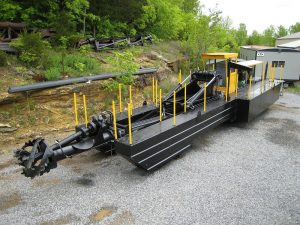 Dredge Central has an impressive amount of inventory on its yard in both new and used conditions. Call us today to schedule a visit and see what DC has to offer you!!